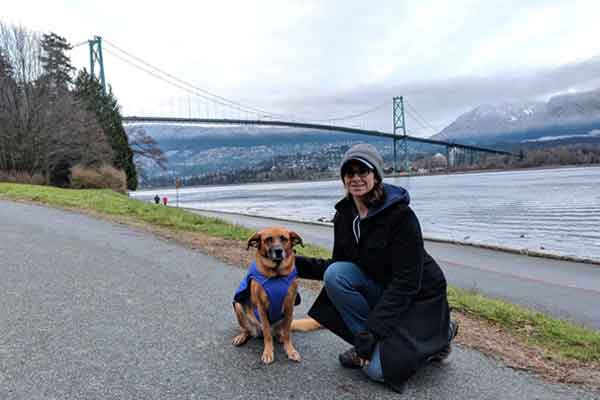 Canadian Canine Experience: A Month In Dog Friendly Vancouver BC

Well I’ve always wanted to live abroad so I feel very fortunate that in December of 2018 I was lucky enough to head to, what I learned to be, the very dog friendly Vancouver BC.

In case you’re curious, Berlin, my 10 year old Shepard mix, and I crossed the border into Canada with ease since the only requirement was proof of her current rabies vaccination, which they didn’t even ask to see.

I knew two things before I left Los Angeles:

Berlin and I were going to have lots of adventures, rain or shine and

The Venetian blinds in our short term rental needed to be temporarily replaced.

Well, you see, Berlin is a very mellow dog except in three situations:

1) After a bath (who doesn’t love the post-bath zoomies?)

3) When she wants to get outside, be it to lay out in the sun or less pleasant things like escaping a scary sound (smoke alarm) or unfamiliar place (new housing). It’s in this third situation we’ve learned Venetian blinds don’t stand a chance.

Want to read about what happened on the road before we arrived at the border crossing? Read PART ONE — An Epic Adventure: Dog Friendly Road Trip, Los Angeles to Vancouver BC at https://feetandpaws.com/dog-friendly-road-trip-los-angeles-vancouver_inland

What I didn’t know was how much I would cherish every waking moment of this time together, even as it was happening.

So, let’s talk about all the fun dog friendly activities Berlin and I enjoyed in Vancouver. If you haven’t guessed it already, it was winter so there was lots and lots of rain, but we didn’t let that stop us.

Downtown Vancouver is the southeastern portion of a peninsula and is almost entirely enclosed by a seawall. In other words, it is a beautiful city with amazing, uninterrupted views of the water in nearly all directions. This path, which also extends around Stanley Park and all the way to Granville Island, is the world’s longest continuous waterfront path. Naturally I decided that Berlin and I should walk it in it’s entirety, in small portions, with one exception. We had a good reason though!

One challenge of going on long walks with your dog in an urban area is the availability of dog-friendly, human restrooms.

Though there were typically large facilities at the popular public areas, ‘we’ had to be more creative on some of our walks. Over the course of the month we were there, a pet store was kind of enough to let me use their employee bathroom and on another day convinced a firehouse to let me use theirs (it was slightly cramped with Berlin in there so I’m grateful it was clean).

Really though, I love situations that force you to engage with locals.

In a cell phone world, it’s becoming less and less necessary while traveling, so ultimately I embrace being a little lost or in need of help.

In part due to the bathroom hurdle, the only section Berlin and I did not walk was from Science World to Kitsilano Beach. I heard there was a lovely dog beach at the latter though. Had there not been one down the street from us, we might have included this destination on our must-do list.

Note: A lot of the Seawall includes a separate ONE-WAY bike lane. Berlin and I walked on the pedestrian path and therefore did not have to abide by this regulation. The list below reflects what direction we walked to get the best view.

If I had to break down the Seawall into my favorite locations, they would be:

To see a map of the entire seawall, visit  http://feetandpaws.com/Tips-and-Such/Seawall-Printable-Map.pdf

There is a remarkable amount of residential high rises in Vancouver and, perhaps because of this, there are also many dogs and, you guessed it, lots of dog parks. This made our walks and adventures really lovely, especially since all the dogs we meet were well socialized.

Now I’ve done a fair bit of traveling around the world and after being in several dog friendly cities (sadly without Berlin), I have a theory why dogs in most dog friendly, really almost dog centered, cities behave so well. It’s not just the availability and accessibility of dog parks, dog friendly trails, restaurants, and stores, but the lack of private yards.

When a yard is not available, dog owners need to take their dog on walks as opposed to letting them outside to do their business solo.

Building from this, when a dog is walked regularly, especially from a young age, they are exposed to sounds, people, and of course other dogs. With their owner’s guidance, not only do they learn to have positive associations with these things as well as good manners, like walking well on leash and properly greeting strangers, but they are also given the opportunity to strengthen their bond together on a daily basis.

In that small but populated space, Vancouver has an impressive number of off-leash dog parks: 8.

If I’m being generous and include some non-sanctioned off leash dog parks, Los Angeles (Inglewood to Sherman Oaks and Santa Monica to Downtown) has about 14 dog parks. Population: Millions. Sadly, not even one of those is on a beach. Not that I don’t love Los Angeles, but Vancouver leaves us much to aspire to in this department. Let’s get on it Los Angeles!

Getting back on track, each of Vancouver’s dog parks has a different look and feel. Some are on the waterfront and lack any sort of enclosure, others are entirely fenced in and surrounded by many of those residential high rises, and two of the eight are right on the beach!

Here is the list of our four favorite downtown dog parks in order of our most to least favorite:

Here is the list of our four least favorite downtown dog parks:

For even more information about all the dog parks in Vancouver, visit https://vancouver.ca/parks-recreation-culture/dog-off-leash-areas.aspx

Oh Stanley Park, where do I begin? Berlin and I enjoyed walking your seawall, especially at dusk when we could see the city lights start to twinkle. We relished running through your trails, especially during a light rain where we were protected by the umbrella of your trees. We happily planned getting lost hiking through your forests, because who doesn’t love climbing over and under fallen giants?

To say that I treasure all of our outings here is an understatement. We miss it everyday.

Some highlights of the park are:

Now, there are some logistics you should know before you go:

And I would be doing you a disservice if I didn’t stress this tip about Stanley Park:

Plan to get lost.

Even though the trails are well marked, cell reception is good (at least for me), and you don’t want get a parking ticket, give yourself some time (and money on your parking pass) to just soak it all in. Go left when you might have gone right, or better yet, let your dog decide your path.

Find out more about Stanley Park at https://vancouver.ca/parks-recreation-culture/stanley-park.aspx

After successfully crossing the bridge with Berlin, we enjoyed the park’s other attractions, including their holiday light display. I got to say, it was one of the best I’ve ever seen and a nice perk for visiting in December! They even had two sections that responded to your sounds (a clap or foot stomp) and a forest of floating orbs. It was beautiful.

The icing on the cake was the treetop adventure.

We had so much fun crisscrossing from tree house to tree house.

Note: The suspended walkways in this treetop section were not too shaky (though that entirely depends on you and your dog) BUT you do have to cross the long suspension bridge to get here. This means that this park isn’t going to be for every person or dog.

So, before you plunk down the money for the pricey admission ticket, I have a suggestion.

Go for a hike at Lynn Canyon to see how you and your dog do on a much shorter suspension bridge first.

This way you can gauge you and your dog’s ability and willingness to cross wobbly bridges without spending money on admission. That said, there is a huge difference between the Capilano and Lynn Canyon’s Bridges and how much they sway. If after visiting Lynn Canyon there is any question at all about your dog crossing Capilano Suspension Bridge, I would leave them at your hotel when you visit.

**Remember, never force your dog into any situation, especially when it involves a wobbly pedestrian bridge that is suspended hundreds of feet in the air. Encourage them, listen (to their body language) and be supportive, not forceful.

Plan your trip and get tickets at https://www.capbridge.com/

This was one of our first adventures after arriving in Vancouver. The weather was perfect and we wanted to explore outside the downtown area.

Lynn Canyon Was The Perfect Destination For A Great Hike.

Unlike Capilano Park, it’s free and therefore a great way to see what Berlin thought of a suspension bridge. The first few steps she charged ahead and then realized there was some extra movement from the ‘ground’ below her. She became hesitant but quickly followed me along and crossed it like a champ. After so many days in the car, it was great to breath the fresh air and stretch our legs surrounded by beautiful nature.

Note: This hike also included a lot of stairs and up/down hill hiking.

View the hiking trails and get more information at https://lynncanyon.ca/

Want To Read More About Our Trip? Check Out My Other Road Trip With My Dog Blogs

Cruising along the coast, driving through a forest of giants, and exploring the Golden City with my dog, Berlin

Part Two: A Day Trip to Whistler with My Dog

When snow doesn’t come to you, you go to it! COMING SOON