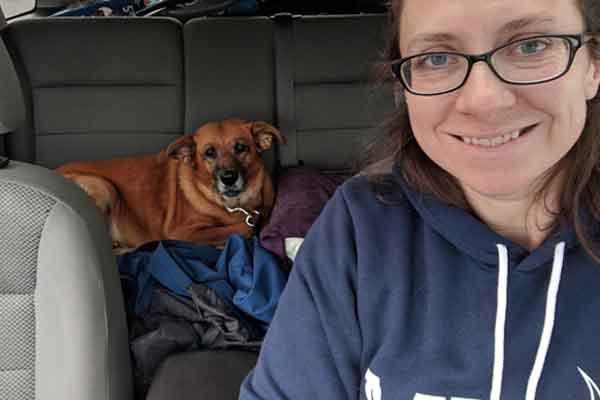 It’s not always easy or possible to bring your dog on vacation with you. So, why not take a dog friendly road trip?

This winter I was fortunate enough to be able to spend a month in Vancouver, B.C. with my husband and our dog, Berlin. This is the story of our adventure traveling to, living in, and returning from this lovely location north of the border. Yes, a dog friendly road trip is possible, and, more importantly, fun!

With many adventures, tips, and lessons to share, I’m going to span it across four parts:  Our road trip from Los Angeles to Vancouver, our four and a half weeks there, our day trip to Whistler, and our road trip back to Los Angeles.

Perhaps if you’re reading this you too are about to embark on a similar adventure with your pup. I can only hope you have as much fun as we had during this special time together.

Me, her thirty-something-year-old mom

Joe, my dad and co-pilot, at least for the trip to Canada (Matt was already up there for work) — Fun note: My dad was on that long journey from Illinois to Los Angeles some thirteen years ago too!

[Insert creative car name here], a 14-year-old Ford Escape. This stalwart girl also drove from Illinois with me in her infancy — She is so deserving of a name but nothing seems worthy

Map of hotels, dog parks, and other fun things along the 1,400 mile journey to Vancouver downloaded to my phone.

Want to see the complete packing list for what I brought for this road trip with my dog (in winter) and a month away from home?

Legend for list of hotels, attractions, and restaurants below:

✖️ Places we did NOT stop
due to lack of time/necessity

Ok, when you’re leaving your house for a month you have to anticipate leaving slightly later than you intended. In our case that was two hours. Oops! Since it was winter and we were going to be losing the light pretty quickly, admittedly we only made one of the two stops I had plotted before arriving at Yosemite View Lodge for the night. Oh, and did I mention it started to rain within one hour of us leaving Los Angeles. It never rains in SoCal. So much for a gradual introduction to a wet winter!

✅ Centennial Dog Park
401 Fallbrook Street, Bakersfield, CA 93309
This is a great park that’s not far from the highway. We ended up just walking around and not entering the dog park. There were also lots of food options on the way to the park in case you, like us, decide to have a picnic in the car.

🛏️ Yosemite View Lodge
11136 CA-140, El Portal, CA 95318
Berlin approved of this hotel by claiming which bed she wanted us to use the second we walked into the room.

This lodge is in a fantastic location, just outside the entrance to Yosemite, and even had a mini kitchen.

They don’t have free wifi so come prepared with all the info you need downloaded or ready to pay $10/24 hours of access.

I’ve never been to Yosemite and was really excited when I added this to our itinerary. Since we were delayed the day before we weren’t able to stop at Mariposa Grove and the Wawona Visitor Center to see the Sequoias that night. We didn’t dwell on this because other great sights awaited us in Yosemite on this, our second day, or so we hoped.

We didn’t realize that it started pouring rain right after we arrived at the lodge the night before and the road we came in on, Route 140, closed due to a rock slide at 2am. In addition to this, there was debris blocking the road just passed the park’s entrance and they closed the gate. Not knowing this, we were up at 5am hoping to see the cloudy, wet sunrise at Tunnel View.

To our surprise, we were actually stuck at the hotel! No way in, no way out.

We saw car after car drive past our window heading towards the park gate only to see it drive back a few minutes later. After an hour or so we noticed some cars weren’t returning. We loaded up the car and found a ranger letting in people from the hotel, advising us to go slowly and to take another road out. Yippee!!

Now, not all of Yosemite is dog friendly. On top of that, not all roads are opened in winter. So, this was our path for the day (Note: This loop, Southside and Northside Drive, are oneway streets):

Have I said it was raining? Because of this we actually opted to enjoy the fantastic scenic drive and enjoy a lot of the views from the car.

Even in the misty haze, Tunnel View was impressive.

We took Route 120 out of the park. It was snowing, which was a first for Berlin so naturally we had to stop. She wasn’t really impressed. I’ll have to make sure she has another experience that’s longer than just a few moments.

It’s at a tiny exit and I was afraid we were going to end up with fast food for dinner but we lucked out finding a fantastic family owned Mediterranean restaurant. If you’re driving through, I highly recommend it.

✖️ Shasta State Historic Park
15312 CA-299, Redding, CA 96003
We didn’t stop by this 19th-century gold-mining town because it was just slightly too out of the way, but it was very tempting.

✅ Mount Shasta Vista Point
4MMH+26 Sweetbriar, Castella, CA 96017
This is just a small parking lot off the highway but for us the clouds parted and we got a great view of Mount Shasta. FYI There are no bathrooms here.

✖️ Pilot Rock Trailhead
41-2E-3, Ashland, OR 97520
We had just stopped and this one required a bit more hiking than we wanted to take the time for so we skipped it.

✅ Winchester Dam Fish Ladder
NE Stephens Street, Roseburg, OR 97470
So didn’t see any fish but it was still nice to get out and stretch our legs. Berlin was passed out in the car.

Too cold for ice cream!

It’s in a great location with ample parking. And the breakfast. It can’t be beat. An array of hot foods from sausages to omelets in addition to a pancake maker complete with whipping cream and strawberry topping.

There were also a few good food options nearby but I can’t say enough good things about the Indian food I had for dinner.

🍴 Taste of India
1365 Villard Street, Eugene, OR 97403
They have outdoor seating but I can’t say if it’s dog friendly or not. I just called in my order and they were nice enough to come outside to accept payment and give me my order. Berlin is already suspicious of the colder weather.

Berlin is super excited for reasons she doesn’t even know – This is it, the final day of driving and she’ll get to see her Dad after 2.5 months apart! After enjoying the yummy breakfast described above, we were able to start the day at a dog park.

✅ Wayne Morse Family Farm and  Dog Park
595 Crest Drive, Eugene, OR 97405
This historic site decided to create a dog park on their grounds. How nice!!

✅ Memorial Dog Park
Wilsonville, OR 97070
These large, grassy dog parks are spoiling us.

✖️ Forest Park
Portland, OR 97231
An enormous wooded area with many trails, we opted out of stopping here for time sake, but I’m sure it is lovely.

✅ Woodland Trail
Olympia, Washington 98501
Ok, I have to admit, this one wasn’t worth the effort. It’s just a trail and my phone took us out of the way to get there. You can’t win them all!

It was getting late, so we booked it to the border!

✖️ Cavalero Hill Dog Park
2032 79th Avenue S
Lake Stevens, WA 98258
We were so close yet so far, so we kept on rolling. Our final destination awaits.

✖️ Howarth Park
1127 Olympic Blvd.
Everett, WA 98203
Beach park with an off-leash area and more – I definitely want to hit this one on the way back.

🛏️ Vancouver, B.C.
We made it!! After a relatively short wait at the border, we were in Canada. We got in around 8pm and were totally beat. With over four weeks of adventures ahead of us, after reuniting with Dad, it was time to get some sleep.

Want To Read More About Our Trip? Check Out My Other Road Trip With My Dog Blogs

Cruising along the coast, driving through a forest of giants, and exploring the Golden City with my dog, Berlin

Part Three: A Day Trip to Whistler with My Dog

When snow doesn’t come to you, you go to it! COMING SOON

Read about our time living in Vancouver

Receive handy dog and fitness training tips, read fun and inspirational stories, learn of my next classes and hikes and more right to your inbox.