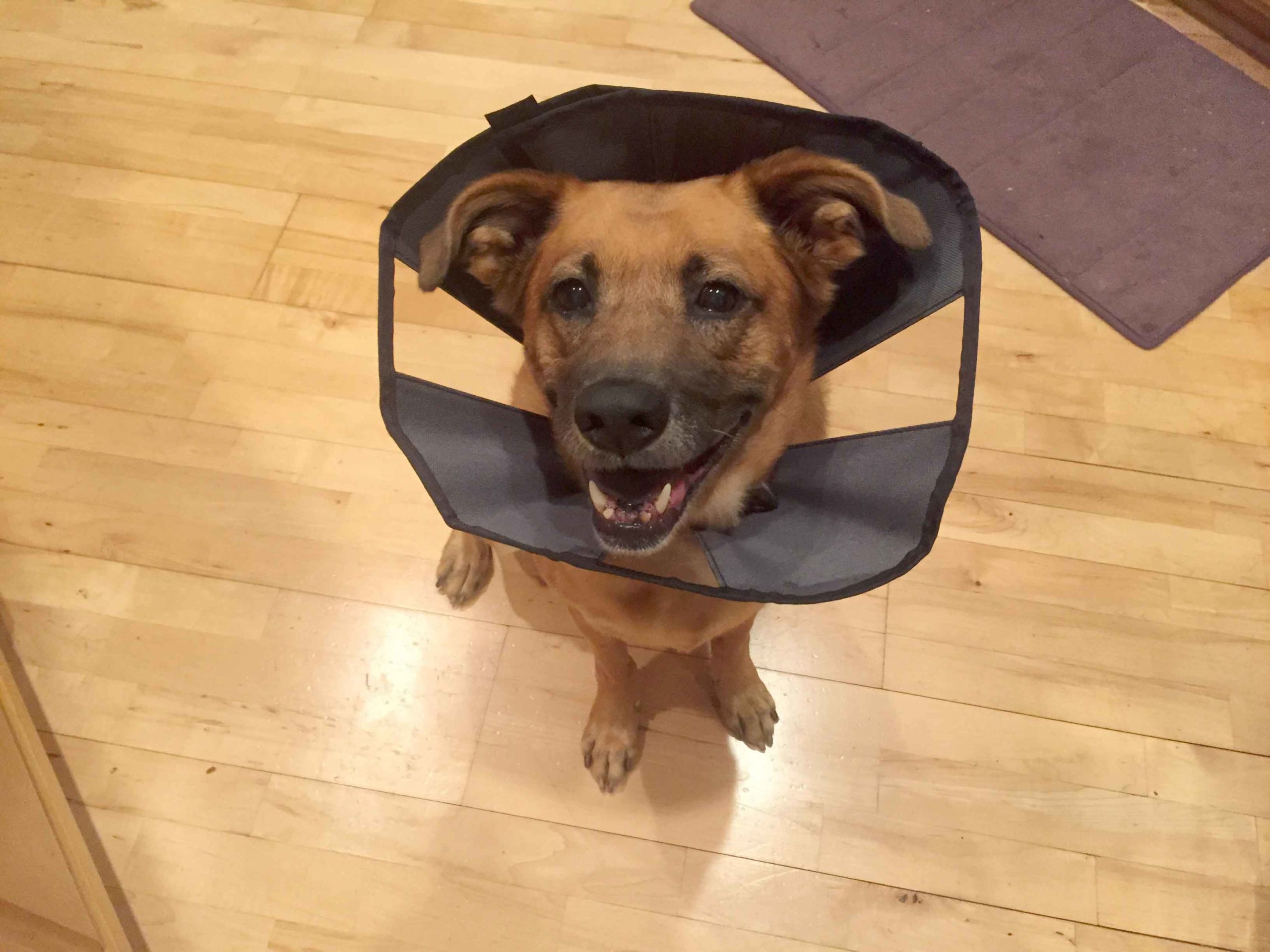 Cancer In Dogs: For Us, A Little Bump And A Big Scare

Trigger Warning: This post is about cancer in dogs.

Though there are more white hairs on her snout and we run a bit slower, Berlin is the same healthy dog I adopted in 2010, or so it seemed until a Friday in December 2017.

December is when we get Berlin’s annual physical.

This includes a full blood panel that, until this point, only confirmed that everything looks good from her heart to her kidneys. With confidence I selected their last appointment of the day, which was just a few hours before an event I was hosting that evening.

There were some other things I wanted to inquire about during the visit including a new small bump on her lower back.

This wasn’t her first suspicious bump.

In fact she has a fairly large one on the underside of her tail near her anus and some others that dissipated after being aspirated (drawing out some of the cells of fluid of the bump/lump with a needle for testing). Like those, I had wanted this one checked out.

I have to admit, I felt a false sense of ease that Berlin’s biopsy results would be clear because they always had been before.

Cancer in dogs happens, but not to us. Right?

The doctor felt the bump and thought it was nothing to worry about it .. that he would aspirate and, as he put it, a cream cheese like substance would come out. ‘So, like a zit?’, I asked. Yep. “Cool, I can handle that.’

I waited in the lobby, filling the time turning the pages in the People magazine I had selected from their table. “This is actually quite a few more pages than I normally get through”, I thought. “Huh? I wonder if Berlin is giving them a fuss?”, I thought. The vet tech and doctor came out with Berlin and we re-entered the private room. They let me know that when they aspirated the bump, instead of puss, blood came out. Lots of blood. If that alone wasn’t worrisome, their stoic faces communicated their disappointment of the bump’s contents.

The vet suggested a biopsy to know for sure what we were dealing with. Of course, how could I say no?

Berlin is my best friend. I would do anything for her.

Unfortunately this meant I had to send her to the back so the Vet could perform the biopsy after all his other clients left. To make matters worse, I had to help them put her in a kennel so she would be safe while waiting. Having come from the shelter, I promised her long ago that I would never put her in such a kennel. This just made it all the more heartbreaking. Not only did I have to walk out and a anxiously wait to pick her up as I attempted to hold back tears, but I broke my promise.

I headed to the pet store to pick up a more comfortable cone as my husband headed home from work. The vet called within 15 minutes saying I could pick up Berlin. The timing was so tight that I had to drop her off at home, change, kiss her and my husband goodbye, and leave. I told just one friend of the situation at the event. To add to the difficulty of being there and not at home with my girl, since my husband is typically at this reoccurring event with me, I was repeatedly asked, “Where’s Matt?”

The drive home felt so long and I was so happy to fall asleep next to Berlin.

It should go without saying that it was a long weekend of waiting.

With the holidays approaching, the results could take up to seven days. Luckily Berlin was not interested in bothering with her stitches much, at least not yet.  So, we left the cone off during the day when supervised and only put it on at night. I’m quite sure she didn’t sleep well but it was for her safety.

Berlin and I were on our evening walk the following Tuesday when the vet called. I waited with baited breath. Really, it’s just like the movies.

You only hear the word ‘Cancer’ and all other words just seem to bounce off your ears.

But, the vet continued to repeat that we were lucky, it was 99% good news (even though it was actually malignant). It was mast cell cancer but stage one. He had never seen stage one mast cell cancer. He had only read about it in his textbooks—By the time he sees and tests most (cancerous) bumps, they are stage two.

So what did this mean for Berlin? Matt and I have both had human relatives with cancer but not much experience with cancer in dogs. Well, our vet had already sent over the results to his colleague who specializes in canine oncology. They both agreed the margins were good (meaning there were enough healthy cells surrounding the removed cancerous ones). He added that another millimeter could be taken (so a really teeny tiny amount), but if it were his dog, he wouldn’t do it. This wasn’t sinking in yet. That there was nothing else that needed to be done.

We had dodged a bullet.

For now, minus healing from the biopsy, our girl was ok.

I immediately called Matt. It was surreal.

We were so sad our dog had cancer but so happy with her biopsy results.

Of course Berlin continued on with the walk as usual and I may have left her sniff a few extra trees and bushes here and there.

She still had her stitches in for another week. As I expected, that is when she started to fuss more since her wound was starting to scab over. Needless to say, she was thrilled when it had healed and she didn’t have to wear the cone anymore.

We will continue to be diligent looking and feeling her for other bumps and checking in on her existing benign ones.

Conveniently this is disguised as petting, which she thoroughly enjoys. That being said, we’ve done our research on mast cell cancer in dogs, particularly where it most commonly shows up and other signs and symptoms.

Our girl is ten years old now, but we’re not throwing in the towel or taking anything for granted. She’s strong, healthy, and loving life. We hope, and are working to promote, many more years together.

Read about Berlin’s epic road trip to Vancouver a year after this, her first mast cell cancer diagnosis, at https://feetandpaws.com/dog-friendly-road-trip-los-angeles-vancouver_inland/